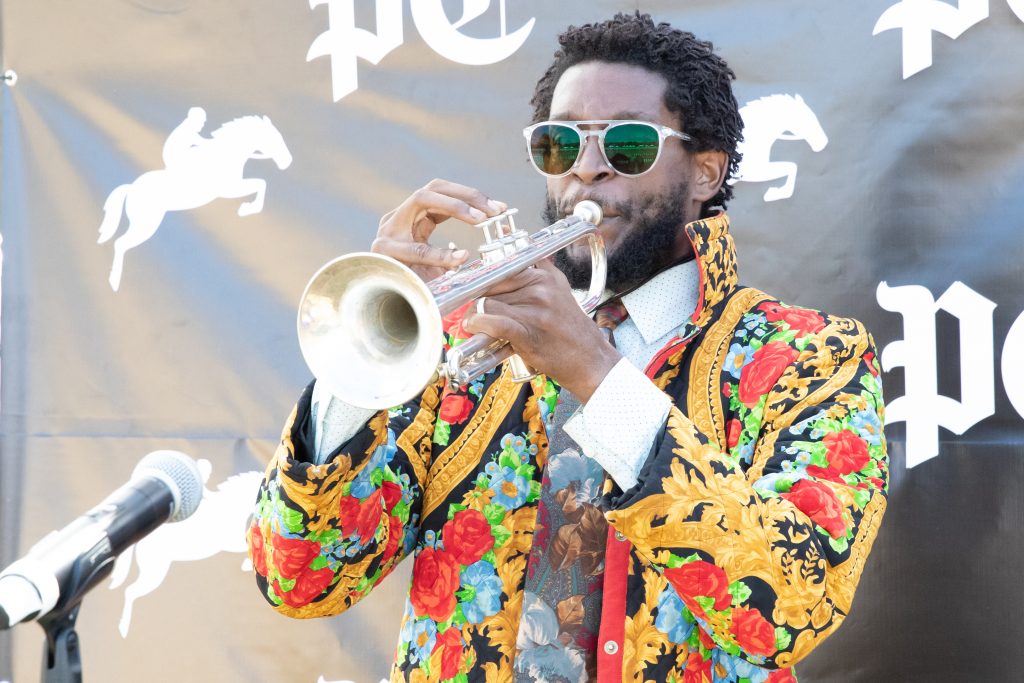 Fashionable decadence has become the standard for horse races across the globe– and last week’s Kentucky Derby did not disappoint. The extravagant race day fashion that showed up for the 2021 Derby Day had us ‘ooh-ing’ and ‘ahh-ing’ in jealous admiration at our television screens. As our excitement grows for the 2021 Steeplechase of Charleston, so do our expected hat sizes.

Today’s horse race viewers show out in outfits that straddle the line between fashion and art. Colorful plumes teeter above smiling attendees and speak to creative craftsmanship and attention to detail.

From patterned blazers to beaded masks, we rounded up our fashion inspo for Steeplechase of Charleston and left our Derby viewing parties with renewed excitement. But we’re hardly the trendsetters in these modern day styles.

From its beginnings in the 12th century UK, horse racing has been a sport associated with class and extravagance. Women chased a high-class status by imbuing themselves with ornamented hats at the most highly-anticipated events of the year: weddings, balls, and horse races became avenues for aesthetic and socioeconomic display.

Today’s admiration for the lavish outerwear stems from much more innocent motives, but the thrill of dressing up for race day is the same. While Col. Meriwether Lewis Clark Jr. had sought to capture the European spirits and styles on American soil, today’s viewers seek to be a part of decades of class and intrigue.

Since then, numerous competitions for the most unique race day looks have popped up across the country, fueling the fashion craze. Fashions on the Field is the highlight of the Melbourne Cup, and the Kentucky Oaks features the Longines Fashion Contest. Celebrities, royals, and eager fans all perpetuate the longstanding traditions and add to a growing love for race day.

The 2020 Steeplechase of Charleston attendees understood the wardrobe assignment. Viewers showed out in their most ornate designs and lavish colors and added to the November day spectacle. We pulled together some of our favorite looks from that day to kickstart your inspiration for Steeplechase 2021! 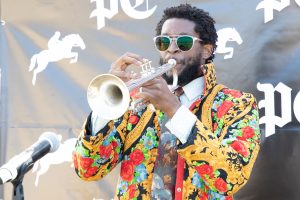 We can’t get enough of the colorful ornamentation on this vest! Stand out at Steeplechase of Charleston with your boldest and brightest patterns. 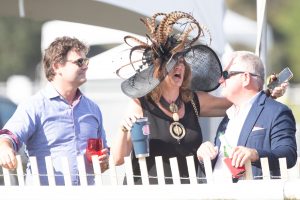 The bigger the better! The beautiful detail in this race day hat perfectly complements a chunky necklace and darker color scheme. 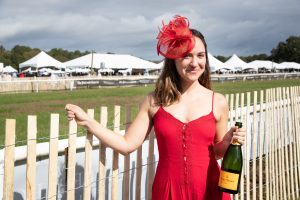 All red for race day! Stand out with a pop of color and an eye-catching accent to top it all off. Doesn’t hurt to have a bottle of champagne in your hand as well! 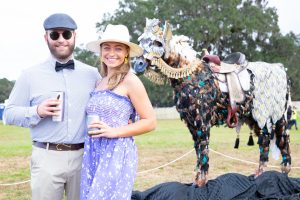 Make your presence known as the best-dressed couple at Steeplechase of Charleston. We can’t pick our favorite element of this gentleman’s attire– the hat? the glasses? the bowtie? 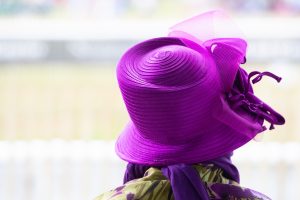 We love the coordination between this hat color and complementing accessories! This rich shade of purple is fit for a queen.

It’s never too early to start getting excited about your Steeplechase outfits. No matter where you’re getting your inspiration from, we can’t wait to see your race day get-ups at the 2021 Steeplechase of Charleston. Go bold! 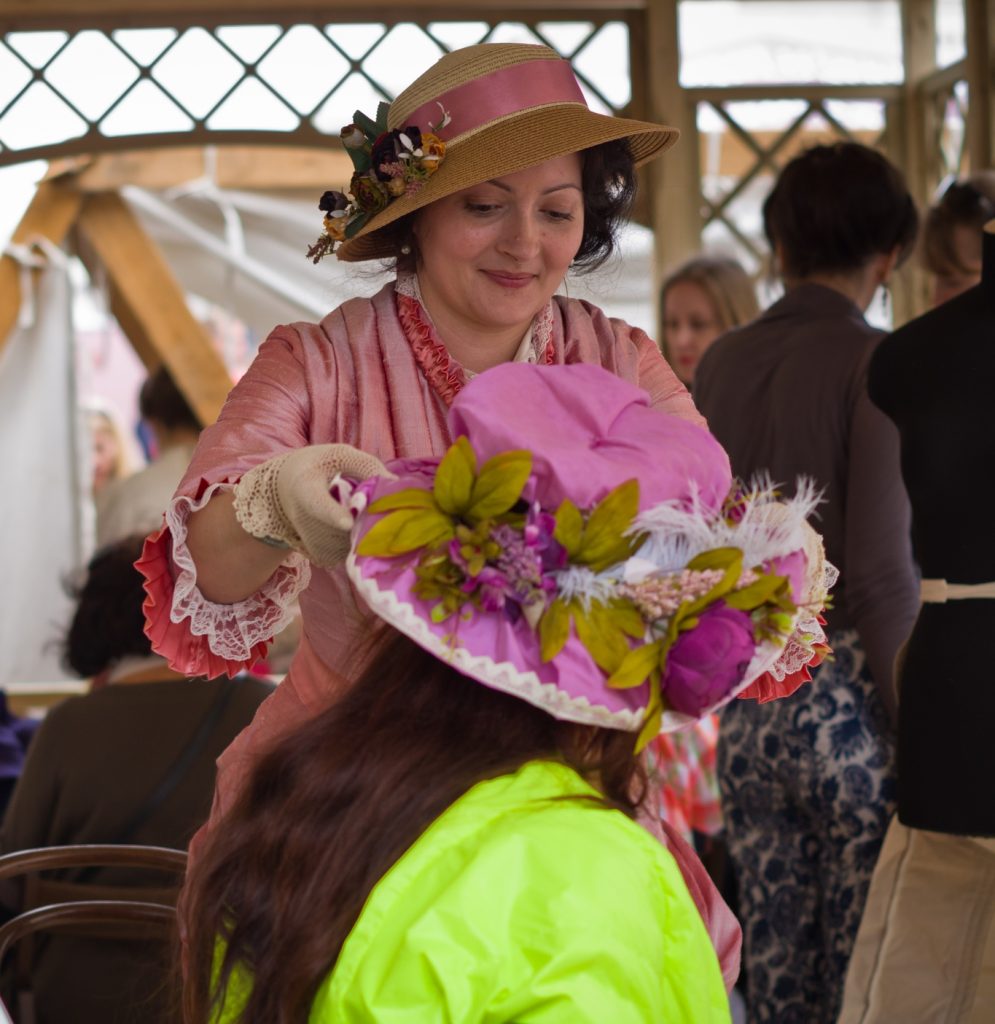 While the Steeplechase is a premiere sporting event in Charleston, race-day fashion is just as important as the race itself.  The Steeplechase of Charleston is THE event to show off your bold style in a creative and fun way, while enjoying the history and tradition of horse racing in Charleston. 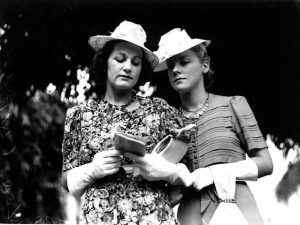 Kings were the original horse owners, so horse racing is fittingly nicknamed the Sport of Kings. Considerable wealth was required to afford horses and pay people to ride them. The prestigious sporting event of horse racing draws in a highly fashionable crowd.

The tradition of wearing hats at horse races is a tradition that comes from both British and Southern cultures. It was started by the founder of the Kentucky Derby. Col. Meriwether Lewis Clark, Jr., modeled the race after European racing events.

Previously, American racetracks were associated with immorality and vices because of the drinking and gambling.  Clark wanted to change this perception and make the race more of a society event that the upper-class would not want to miss.  In order to do this, he made full-morning dress a requirement for the event.  He recruited high-class women to attract his ideal audience and they began to attend the event wearing dresses, gloves and hats.

The Hat Makes the Outfit 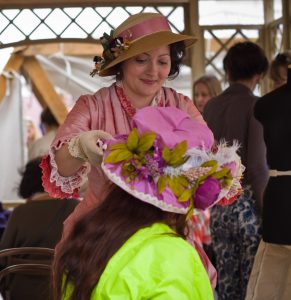 Hats really became noticeably associated with horse racing in the 1960s with the spread of television. The arrival of television crews prompted race-goers to up their headgear game. Women began choosing wilder and more extravagant hats in order to stand out from the crowd.

Though fashion norms began to loosen during this time, hats remained popular at horse racing events. Showing up to a horse race without a hat was considered a major fashion faux-pas, because hats are the statement pieces. Women would coordinate their dresses, shoes, handbags, and even parasols to match their hats.

Many people find inspiration for their race-day hats from the royal family in England. Queen Elizabeth II has gained a faithful following for her race-day headgear. It is estimated that she has worn over 5,000 hats during her reign. At the Royal Ascot Races, people even bet on what color she will choose to wear to opening day.

The hat craze began to dwindle slightly in the 80s and 90s. However, the royal weddings in 2011 and 2018 caused a resurgence of interest. A new generation of Americans was exposed to the work of milliners, women’s hat makers, as well as fascinators. 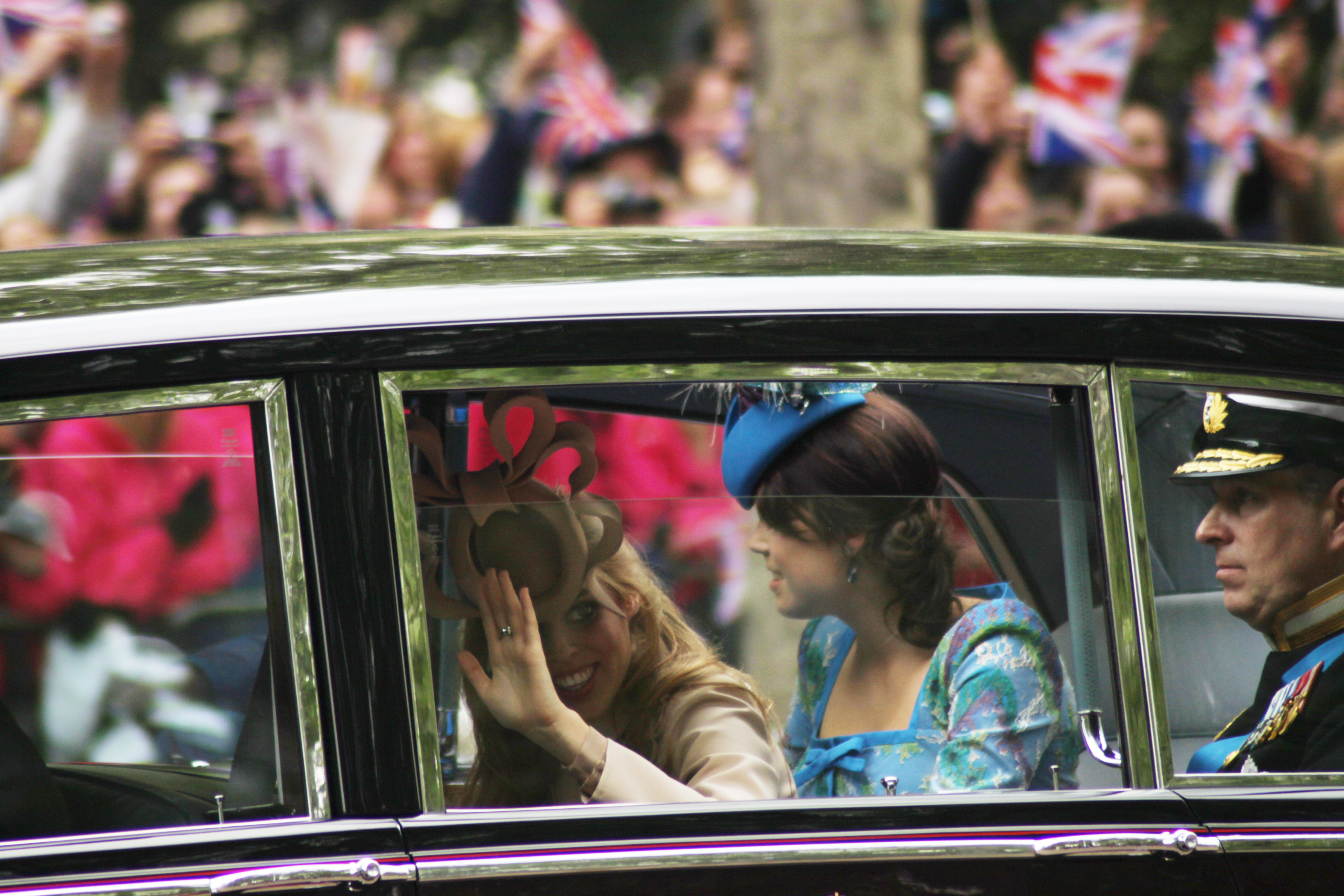 Fascinators are headpieces ‘fastened’ to the head by a headband or clip. They have become even more favorable than hats in recent years after the young royals were seen wearing them. Though they are different from wide brim hats and offer no sun protection, fascinators allow the wearer to stand out with their creativity and are a popular choice at horse races.

The hats are not just for women! Men often don fedoras and boating-style hats to the steeplechase.  In addition to hats, seer-sucker suits, braces, and bow ties remain popular fashion choices for men. If you favor a more casual look, pastel-colored polo shirts and khakis are good options.

Women typically wear brightly-colored sundresses and skirts. If you choose to wear a patterned garment, be sure it will not clash with your hat. As for footwear, wear comfortable shoes to navigate the grassy terrain.

One thing is for sure, Steeplechase of Charleston attendees will be bringing their unique, Southern style to the 2019 event. 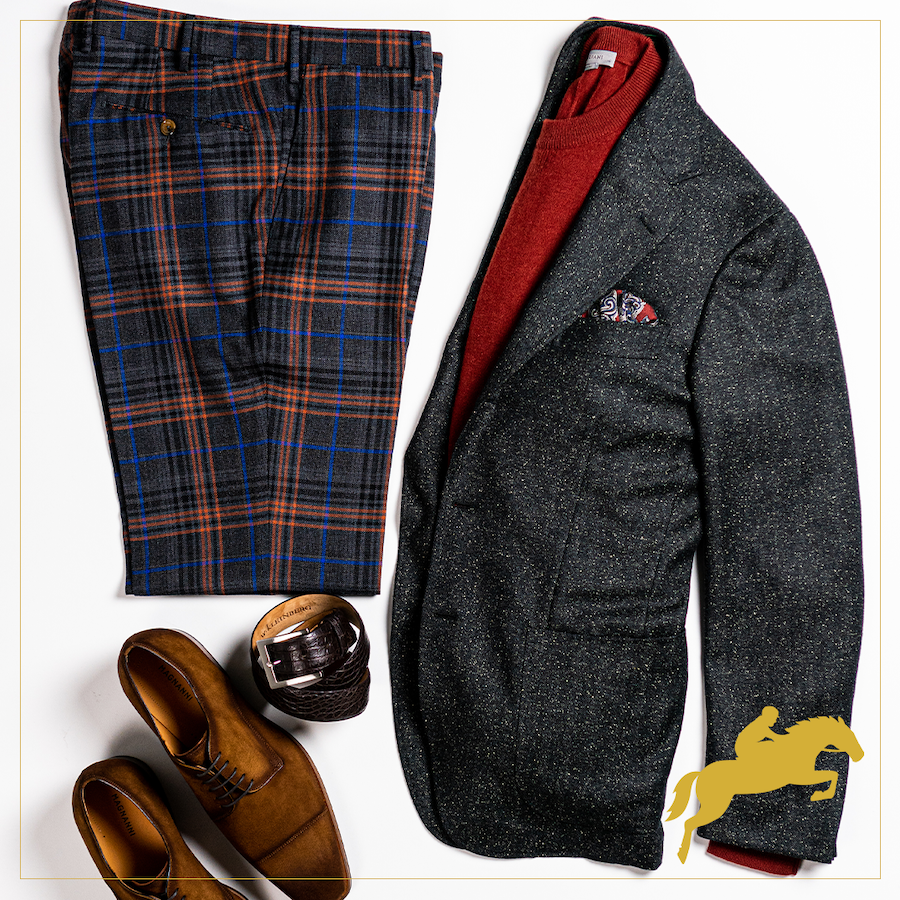 Get #DressedinDumas for Steeplechase of Charleston

Steeplechase of Charleston is thrilled to have M. Dumas & Sons as our official menswear sponsor. With race day soon arriving on November 17th, M.Dumas & Sons have pulled together 5 race day looks for men that will impress. From luxury to casual comfort, this collection offers a variety of race ready ensembles.

Classic menswear mixes it up for fall outdoor events

From tailgates and horse races to outdoor weddings and oyster roasts, your fall calendar can fill up quickly. And what better reason to add some new pieces to your wardrobe. To give you some inspiration, here are all the best men’s style essentials for your upcoming fall outdoor events:

For occasions when you’ll need to look a little more polished, a nice textured sport coat will elevate a fall wardrobe dramatically. Since fall weather in the South can be unpredictable, coats in heavier fabrics like Donegal wool and tweed will help keep you warm. This on-trend take on traditional styles will look the part whether you’re at the racetrack or afternoon reception.

Take it up an extra notch by drawing inspiration from European style. Don’t be afraid to mix and match not just colors and patterns, but also fabrics and textures with carefully executed combinations of wool, cotton, suede and silk. You’ll never be ridiculed for being overdressed. 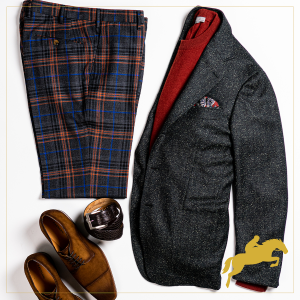 With so many events, you may consider investing in high-quality classic apparel that can be dressed up or dressed down depending on the occasion rather than trendier pieces. A layered look like this Quilted Lowerdale Vest from Barbour over a crisp, cotton sport shirt is the perfect silhouette for this season.

While you may think fall and winter call for more muted color palettes, it’s a great time of year to get creative with your color scheme. Incorporate autumn-hued pieces like these Pantaloni Torino Cotton 5-Pocket Pants in hunter green. Other colors to consider include rust, burnt orange, mustard, and olive. Complete the look with a durable leather boot in a timeless design for all-day comfort. 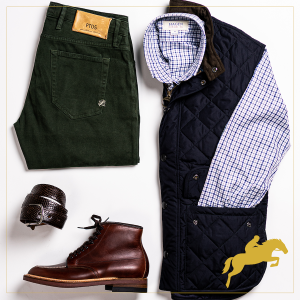 Although events like the Steeplechase of Charleston are built on tradition and heritage, they’re the perfect opportunity to show off your own personality and add a bit of style with a contemporary new look.

A black on black ensemble like this belted wax cotton jacket paired with wax cotton denim offers just the right amount of edginess without straying far from tradition. The zippered detailing on the pant pocket and glazed alligator belt are subtle, unexpected touches while the ribbed crewneck sweater adds just a splash of color. 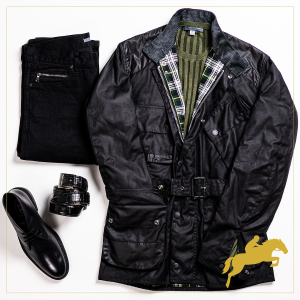 If fashion and luxury style aren’t really your thing, stay true to your personal style with simple fall basics. A comfortable corduroy work shirt layered over a Henley packs some old school sporting style. Pair it with denim in a tailored slim or classic straight fit.

When it comes to footwear, go for something durable that can hold up to anything the fall weather can throw at it. Classic duck boots can be worn all season long for work and play.

Whether you’re shuckin’ oysters at a bonfire or tossing back beers at a tailgate, you’ll find yourself repeating this casual low-maintenance look throughout the fall. 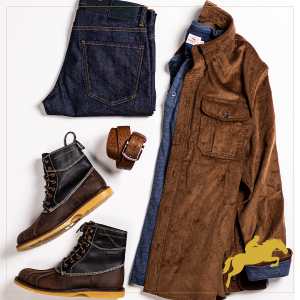 It doesn’t matter if it’s the first time you’re going to an event or if it’s an annual tradition for you and your friends, you’re going to want to look the part. If there were ever a classic fall outdoor look for men in the south, this is it.

A colored 5-pocket pant paired with a classic plaid vest is layered together with a complementary sport shirt. Boots in a tasteful desert suede walk the fine line between sport and luxury, while a two-tone glazed alligator belt adds a hint of polish and sophistication.

When dressing for any event, consider not just your personal style and preference but what you’re doing and where you’re going. And most importantly, be confident. No matter what you wear, it’s how you wear it. 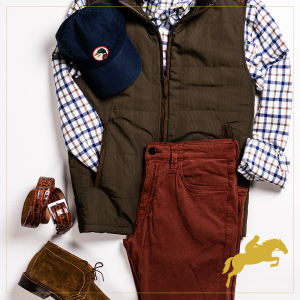