Equestrian Art and Steeplechase of Charleston

Equestrian art has been around for even longer than horse racing (read more about the history of horse racing in South Carolina here). Over time, it has grown and changed in order to remain relevant.

Early equestrian art dates back to the 16th century when monarchs and noblemen would commission portraits of their horses. Horses were often used in portraits to lend a sense of importance and splendor to their riders.

There were three common poses for the horses: standing still, trotting sedately, or balanced on its hind legs. In the trotting pose, the horses were usually portrayed with both front legs extended forward and both hind legs extended backward.

Wealthy Southern families in Charleston often imitated their European cousins by commissioning fashionable portraits of themselves and their horses from leading artists. Many of these portraits can currently be found on display at various art galleries in Charleston like the Gibbes Museum of Fine Art and the Dog and Horse Fine Art Gallery. 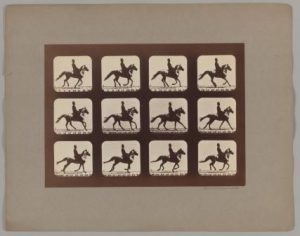 Photographer Eadweard Muybridge captured photo sequences that showed the footfalls in a horse’s gallop. His photographs displayed the way the feet and legs of the horses were actually moving. As a result, artists have been able to accurately portray the natural gait of the horse. 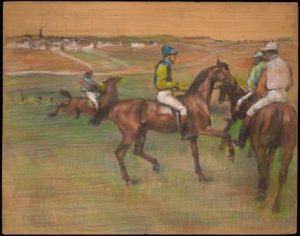 As it grew in popularity, thoroughbred racing served as an inspiration for many 19th century impressionist artists. French impressionist painter Edgar Degas referenced Muybridge’s photographs of the horse in motion, studying them for his later work. In many of his paintings, he aimed to capture the moments just before the race started.

One of the most esteemed equine artists is Sir Alfred Munnings. He traveled around England in the early 1900s taking commissions for society figures with prized horses. His impressionist style gained popularity because of his attention-to-detail. He aimed to illustrate horses as they actually looked rather than over-stylizing them.

British painter George Stubbs is considered to be the first sporting artist. In the late 18th century, he examined the anatomy of horses, spending eighteen months dissecting equine carcasses.
His detailed, anatomical drawings aided other artists.

In America, Franklin Voss was one of the most prominent equine artists of his time. Voss participated in steeplechase races as a young man, which gave him a great understanding of horse racing. His knowledge of his subject matter really shows through in his work.

Equestrian Art at the Steeplechase of Charleston

Sam Robinson is an equine artist and the official artist for the National Steeplechase Association. He follows in the tradition and art styles of Munnings and Voss. For Robinson, art is more about telling the story rather than selling as many pieces he can.

While on location at a race, he paints as much as he can and then finishes his paintings back in his studio.

We caught up with Robinson at the Carolina Cup in March to learn more about his art.