When visitors are introduced to Middleton Place, the jewel of plantation row 15 miles up the Ashley River from downtown Charleston, they rarely think of horses.

The Middleton experience features the grand plantation, the spectacular scalloped grounds, the elegant Ashley River sliding alongside, the prominent family that owned the plantation, the beautiful 18th-century buildings and magnificent live oaks, and the opportunity to reflect upon the regrettable slavery and oppression of the people who built it all and comprise the deepest scar on American history.

But the 110-acre National Historic Landmark is but a sliver of the 7,000-acre estate, which can be viewed and enjoyed riding atop the gorgeous equine beasts that ambulate along the paths adjacent to the grounds. Choosing a one-hour guided tour of the rice fields, dense forests and open terrain of Middleton Equestrian Center, makes one privy to a miniature birds-eye-view of the surrounding scenery and the Zen of being one with nature, both in flora and fauna form.

Trotting the bridle path thick with pines and hardwoods offers views of the main grounds and many outbuildings, the signature butterfly lakes and terraced lawn, and the placid rice pond beyond. Led by guides, the ride is both a sensory extravagance and an educational delight, where visitors learn the economic, cultural, political and physical history of the plantation and its inhabitants. Guides also offer tips on how to increase riding comfort, both for the horse and for the rider. 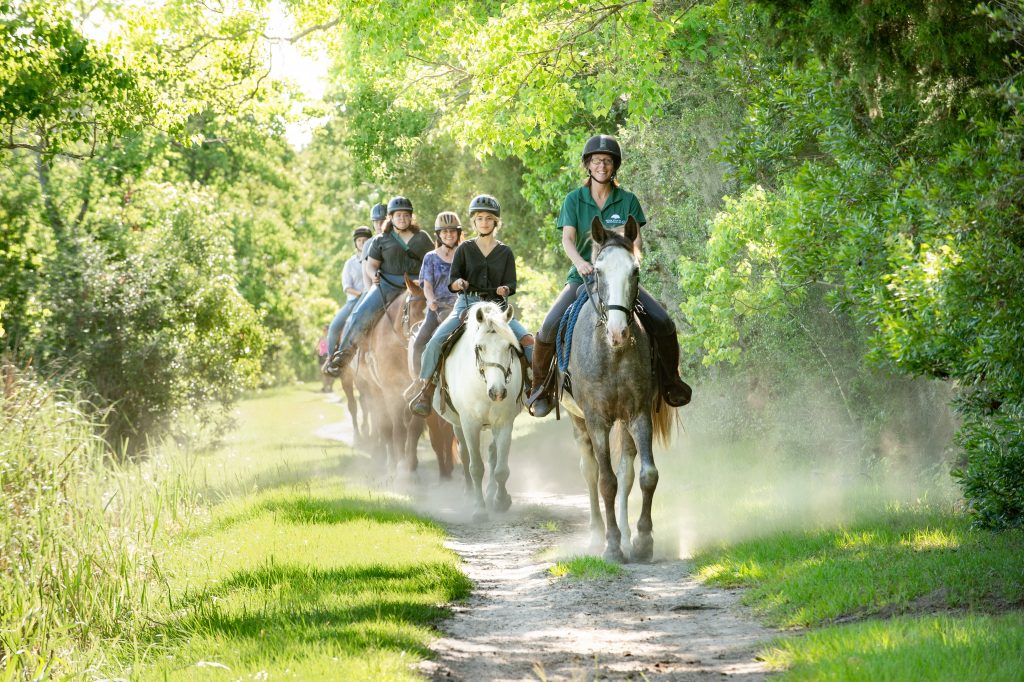 Along the way, riders may espy representatives of the current inhabitants of the land and water, as one visitor wrote on Tripadvisor. “…so much information shared about the history of Middleton, and … animals (alligators, herons, turtles, snakes, bald eagle) … seeing that wildlife was a great part of the ride.” Dolphins may also be spotted breaching the water’s surface on the river.

The Equestrian Center offers boarding, riding lessons and the trail rides mentioned here. Freelance writer Marie McAden was amazed at her experience. “Before long, we had reached the rice mill pond, a favorite hangout for coots, marsh hens, heron, ibis -and alligators. Lots and lots of alligators… someone pointed out a gator swimming in the water with just his eyes peering above the surface. Then there were the two sunning themselves on the muddy bank and the six-footer eyeing the innocent coot.”

The land upon which Middleton Place sits was granted by King Charles to Edward Middleton, an Englishman who emigrated here from Barbados. When his son, Henry Middleton, died in 1737, 20-year-old Henry Middleton inherited the property, along with another 1,600 acres on the Cooper River. Arthur had many of the structures built and later signed the Declaration of Independence, which of course, did not apply to the enslaved Africans he commanded. Much of the property was burned down during the Civil War or crumbled in the earthquake of 1886. It was restored by a Middleton descendant in the early 20th century and later placed on the National Register of Historic Places.

With the growth in popularity of equestrian pursuits around the Lowcountry and other parts of South Carolina, the Middleton Equestrian Center has established itself as a must-visit for horse lovers.

Reviews for Middle Equestrian Center are uniformly superb, with a five-star rating from more than 100 Tripadvisor reviewers. Children as young as 10 may ride, accompanied by an adult.