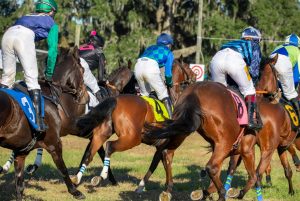 Jockeys wearing a variety of patterned and colored silks, racing to the finish line. Photographed by William Quarell.

One of the most intriguing aspects of a horse race is not just the high stakes of the race itself, it’s witnessing the colorful array of jockey uniforms speeding through the track like a technicolor dream. Jockey uniforms, referred to as jockey “silks” date back to Ancient Rome, like most contemporary sporting events.

Historians speculate that Ancient Romans used colored capes during chariot races to differentiate between drivers so that spectators could track their favorite player. Similarly, during the Medieval era, joust participants used a combination of patterns and colors along with a crest of the patron or patrons, similar to that of modern-day auto racing uniforms. 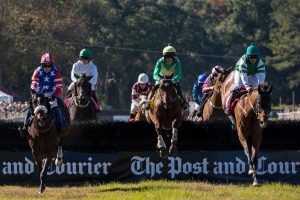 Variety of jockeys in their colorful, patterned silks racing over the poles. Photographed by John Carlos

The earliest record of horse racing events dates back as far as the 1100s, however, these events and their colorful silks were not popularized until the 17th and 18th centuries. During this period, horse racing events were primarily reserved for the aristocratic class, often referred to as the “Sport of Kings”.

By the mid-18th century, equestrian organizations such as The English Jockey Club were established to control and set standards for the majority of horse racing events in Great Britain. By 1762, The Jockey Club agreed to implement specific colors and designs, often in the design of the horse owner’s family crest.

The jockeys themselves do not choose the design of their silks, rather it’s up to the horse owner.  These silks change depending on the owner of the horse. The owners have to register the silks with The Jockey Club to ensure that there are not any duplicated designs. If two of the same   silks are seen, it means that both of the horses belong to a singular owner. 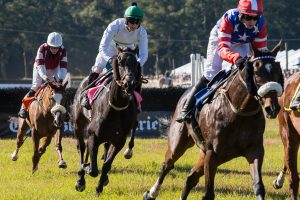 Three jockeys, one behind the other, racing to the finish line. Photographed by John Carlos

The rules of design are mandated by The Jockey Club. It costs $100 to register and is renewable on December 31st of the year. One of the most important design rules is that the design has to be identical on the front and back of the bodice. In addition, there can only be a maximum of four colors, two on the sleeves and two on the bodice.

Jockey silks were in fact made of silk, crafted from the many regions of Asia. As horse racing grew in popularity within the U.S., American jockeys still followed the rules and regulations of The Jockey Club. Even today, horse-race owners are required to register their “silks” with The Jockey Club.

It’s evident that tradition still stands strong. The only major change is that uniforms are now produced with synthetic fibers such as lycra and nylon to improve fit and mobility. The material may have changed, but the traditional designs and colors have retained their original, symbolic purpose. 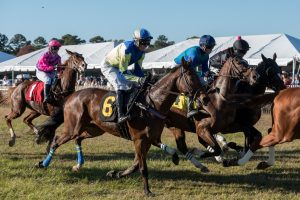