How Racehorses Get Their Names 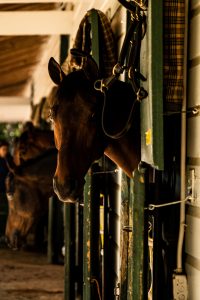 Horses peering their heads out of the stables. Photography by Matt Crum.

Tabasco Cat, Seattle Slew, and Red Rum may sound like names for a new, start-up brewery. However, they are the names of famous Thoroughbred racehorses. While they may seem frivolous, the rules for naming are far from such.

So, how do racehorses get their unusual names?

Toby Edwards, Executive Director of the Carolina Cup Racing Association and former jockey, says while there are no “strict rules”, a traditional naming system still exists. Edwards mentions that the most common naming method is to name a horse after its parents. Many owners find a way to combine the name of the dam (mother) and the sire (father). For example, the parents of the horse Elope are named “Gone West” and “Proposal”. The humor writes itself.

However, many racehorse owners have moved away from this method. Many opt for a name of sentimental value. For instance, Edwards named his first horse, Houns Tout, after a cliff he grew up near in the United Kingdom.

Like jockey silks, The Jockey Club sets the rules and regulations for naming racehorses. Owners are required to register their horses’ names to compete nationally. They have created and listed over twenty-one different rules in The American Stud Book Principal Rules and Requirements. A majority of them pertain to classes of names that are “not eligible for use”. For instance, “names consisting of more than 18 letters” or “names similar in spelling or pronunciation” are among the many ineligible classes of names. To view the full list of restrictions, click here.

Each “rule” ensures that each racehorse has a unique and identifiable name to avoid confusion amongst participants and spectators. However, according to Edwards, on rare occasions, two racehorses may have the same name. This arises when international racehorses compete because they have a separate database of names. In that case, the suffix of the origin of birth is added to the end of the name. For example, (GB) for Great Britain and (FR) for France. 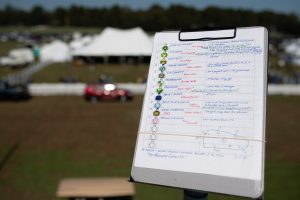 Race sheet for Steeplechase of Charleston 2019, including the names of competing racehorses. Photography by Gary Coleman.

It becomes apparent that the unusual names are the byproduct of strict regulations set by jockey clubs. Owners must get creative to have a name that is both memorable and eligible. One-third of names submitted are outright rejected, for breaking one or more of the rules. In this case, owners may submit several different names to only have one or two approved.

There is no shortage of interesting names at the Steeplechase of Charleston. In fact, last year’s first-place winner of the 5th race was named PLEASECALLMEBACK. Not sure that name has any sentimental value, however it surely creates comedic relief for a race full of high stress and high stakes.

While competing is a science, the process of naming is that of art. Join us at Steeplechase of Charleston 2022 on Sunday, Nov. 13, to bear witness to the display of cleverly-named horses and to cheer on your favorite competitors!