Race Day: Your ‘Need to Know’

With the racing season in full-sprint, it’s time to start looking forward to the fall’s most anticipated horse-racing event in the South. On Nov. 13, the Steeplechase of Charleston will once again have the honor of hosting the final competition on the National Steeplechase Association© circuit at the beautiful Stono Ferry Track in Hollywood, SC.

While offering a myriad of activities–from simply spectating and reuniting, to the Merchant Market, ample food & drink vendors, fashion-watching, and more–the Steeplechase of Charleston promises a unique opportunity to discover history, meet new people, and build new relationships, all while providing a fresh venue to show off your finest digs. With horse racing being the focus of the day, though, here is some history about the sport that you need to know so that you’re on the right track with the other spectators. 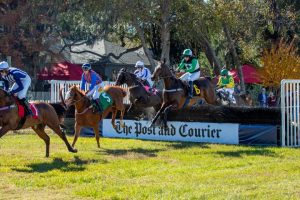 Competitors hurdle one of many obstacles in the pursuit of victory.

The Steeplechase of Charleston seeks to follow these traditions, and boasts a day-long, family-friendly event of racing, camaraderie, and more, with the gates opening at 8:00 am. After arriving, there will be ample time to soak in the scenery, grab a bite, and check out the creative local artisans at the market before the opening ceremonies, which are scheduled to start at 12:30 pm. Immediately following, there will be five separate races starting between 1-4 pm. Each race will consist of the riders and thoroughbreds facing five different obstacles and four turns per lap, guaranteeing a challenge to the competitors and an exciting series to spectate as we witness the finale of this year’s National Steeplechase Association circuit. 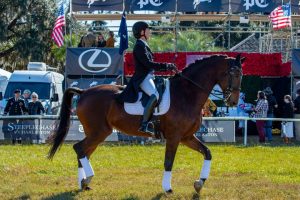 A dressage rider and horse displaying after a performance.

With the option to purchase a Tailgating or General Admission ticket, or to upgrade to a VIP section, the seating availability caters to anyone’s needs and offers multiple viewing angles of the event. Gates close at 5:00 pm, allowing any spectator a great day to relax and marvel at the fashion and sport around them, all while enjoying excellent food, drinks, and the beauty of the Lowcountry.

We hope to see you at the race!