“A race course is… animated by one absorbing passion. Race horses, shrouded in all the covering of hood and body-clothes, are led on the ground by their faithful grooms. Jockey stands, filled to overflowing with spectators, in their holiday finery, gazing on the passing scene, with eager, happy, and expectant faces… are huddled together…”

With thrilling accuracy, the words from the original agenda of the South Carolina Jockey Club still ring true today. For almost 300 years, South Carolinians have been trend-setters in bringing horse racing to national attention. While today’s itinerary includes horse races across the country, each event can trace ties to these origins.

The club boasted an elegant exclusivity and featured figurehead members like Daniel Ravenel, John Drayton, and William Moultrie. However, the Revolutionary War interrupted a growing excitement for the club; the South Carolina Jockey Club ceased its participation until the British evacuation in 1783. From there, membership flourished and thus began the “golden age of racing.”

The abundance of tourists Charleston sees began long before us; as the races grew in popularity during the 1850s, so did their attendees. New York City ships shuttled passengers to the Holy City, and breeders from across the region all wanted entry into the event. Businesses closed, schools dismissed students– daily life practices halted to direct attention to the tracks.

The galivanting regretfully ended with the onset of the Civil War. The war left the Jockey Club in shambles, forcing them to disband in 1899. When the charter ultimately revived in 1984, however, so did the longstanding values of southern honor and individual excellence. The practices and vitality from the original club gave life to the Stono Ferry Plantation. Today, the Steeplechase of Charleston thrives at these tracks and displays generations’ worth of love for horse racing. 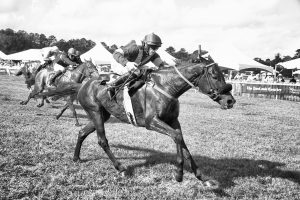